“Against the Tide” is a compelling film that documents what happened in the United States during the Holocaust, highlighting how a young activist, Peter Bergson, challenged Washington and the establishment Jewish organizations to demand that the rescue of Europe’s Jews become a top priority for American Jews. Through a never before seen 1977 interview, Bergson gives a first-hand account of what occurred. The more successful he became in attracting support from important non-Jewish members of Congress and Hollywood personalities such as Ben Hecht, Edward G. Robinson and Paul Muni, the more threatened and resentful Jewish establishment leaders became. Only the ultra Orthodox Vaad Hatzala, led by Rabbis Aaron Kotler and Eliezer Silver worked with him.

"Against the Tide" addresses the attitudes of President Roosevelt and his senior advisors, who used the pretext of winning the war against the Nazis to block any Jewish immigration to the U.S. and juxtaposes the events in America with heart-wrenching heroic stories of the doomed Jews of Europe and the leaders of Polish Jewry who had faith that their powerful brothers and sisters in the United States would somehow be able to save them. 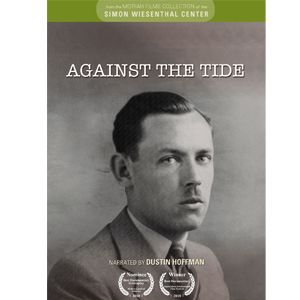